It’s no secret that women are starting businesses and having success in the marketplace. Yet, according to a report by the U.S. Department of Commerce Economics and Statistics Administration, 70 percent of women owned businesses only generate $25,000 in annual revenue. Lisa N. Alexander, The Marketing Stylist™, talks to Australian businesswoman, Annemarie Cross of the Ambitious Entrepreneur about her Women’s Collaborative Project and how these women can crush that $25K through joint ventures.

“Some women are quite comfortable earning $25,000 a year in their business and that’s perfectly okay,” says Alexander. “But for the woman who has her heart set on ‘world domination’ joint ventures is definitely a way to do so,” she continued.

Alexander knew of the nightmares some women lived through because of collaboration projects gone bad. “Friends of mine told me they would never work with another woman-owned business again because their experiences were that painful,” she commented. “I wanted to know if more women felt the same way or if joint ventures were having positive effects on bottom lines for women business owners,” says Alexander. 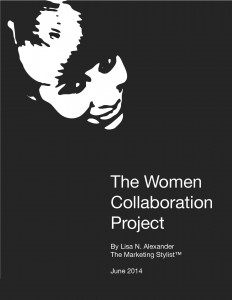 The Women’s Collaborative Project is Alexander’s report based on survey results from female business owners.

Listen to Alexander’s interview with Cross on the Ambitious Entrepreneur Network.

Join the conversation and use the hashtags, #Crush25K and #ClubOnePointEight.