Getting media coverage for your event

Update: At the time of posting, I wasn’t certain if Houston bloggers had been included in the PR push for the Smahrt Girl event. Pamela Ellis, founder of the organization sent me a note to say that fellow blogger Mandy of CEOglam and Brevello also helped promote the event.

It’s prom season and Smahrt Girl founder, Pamela Ellis, did something to help families get their daughters off to the ball in grand style. She coordinated a prom dress giveaway, complete with shoes and accessories and an etiquette class and makeup tutorial. The event received a great deal of publicity! Houston TV stations, ABC Channel 13 and FOX Channel 26 picked up the story as well as Telemundo Channel 47. Well read publications like Houston Woman Magazine even ran the organization’s press release and Houston DJ, Candy Eastman, of Majic 102.1 FM even mentioned the event on her show. If you’ve ever hosted an event you know getting media coverage for your event is not always an easy task.

The day of the dress giveaway, we repeatedly heard that the ladies found out about the event because of something they saw on TV or heard on the radio. The coverage helped the organization reach its goal of helping Houston families and getting girls to the prom in style.

In addition to the heart-felt thank you’s Pam received from the girls and their mothers, were questions from small business owners. They wanted to know how she was able to get such broad coverage. Most important, they wanted to know the name of the PR firm she used because the results were staggering.

Truth is, Pam didn’t use a PR firm.

Here’s how she got media coverage for her Rock Your Dress event. 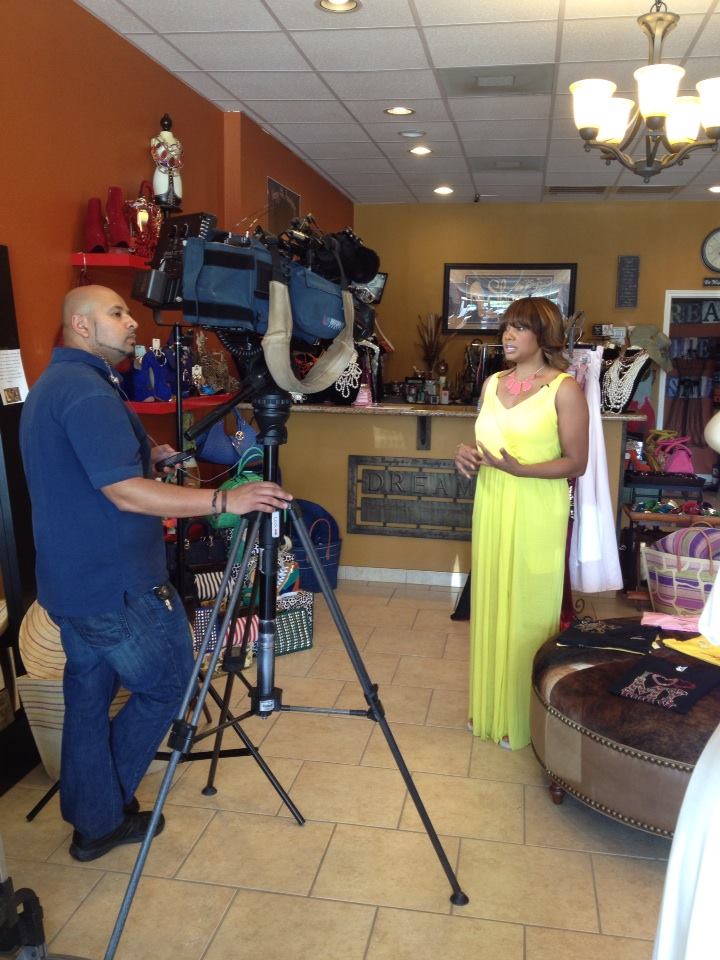 This event involved several members of the community. Anyone could donate a dress and business owners around the Houston area agreed to be dress drop-off sites. Business owners like Carolyn Gray taught the girls etiquette and manners and LAMIK did the makeup tutorials. So the event had lots of involvement. The event helped a group of girls who might not have gone to their proms otherwise and prom is just one of those events everybody remembers.

The event had good visuals. Camera crews could go to dress pickup sites and film the donations and had things worked out differently with the venue, we could have had a camera crew there the day of the event. Images of girls in their dresses, shots of the girls learning their manners or how to apply the perfect smokey eye, all great images that help tell the public a good story. So to get media coverage you have to have a great event with great visuals.

To send or not to send?

Here’s where things get really interesting. Genyne Vinson helped coordinate the event and was handling logistics. She shared how the media coverage came about and what she told me left me speechless. Smahrt Girls found out that Cynthia Cisneros, one of the reporters at ABC Channel 13, had passed on the press release to Patricia Lopez, the station’s consumer reporter. What did Genyne do? She sent Patricia an email and when Patricia didn’t respond…she called and left her message…repeatedly. Genyne said that until she heard a no from Patricia, she was going to keep calling and leaving messages.

Now, I’ve interviewed people who said you can get blacklisted by journalists for this type of behavior and I believe that to be true but in this instance Genyne’s persistence paid off.

Patricia even thanked Genyne for her persistence. She said most people would have thought she was ignoring them. Truth is, Patricia never received the first email (it’s still lost in cyperspace) so the phone calls and messages kept the event front of mind even though she couldn’t respond right away.

Now, here’s something important to remember before you go filling up a reporter’s voicemail inbox. Remember, Patricia had been given the information from a fellow reporter at the station. This was the organization’s “in” and what Genyne did was simply followup. She didn’t take the silence as a no and Patricia complimented her for her tenacity.

There are a couple of things we can learn from Smahrt Girls and their Rock Your Dress Event:

Don’t forget to pitch bloggers who cover your community and industry. I don’t know if Houston fashion bloggers were contacted but they could have helped spread the word too.

Getting media coverage for your event is possible even if you don’t use a PR firm.

There are about 100 young ladies donning beautiful formal dresses to their prom this year as proof to that fact.